Single-Band vs Dual-Band vs Tri-Band WiFi Routers: How to choose？

Unless you're a CS or ICT student (and sometimes you are), you can quickly find yourself overwhelmed when you start shopping for a new router. That's because new devices, including routers, always come with confusing labels, letters, and numbers that look like they're supposed to convey a lot of information, but really...no.
Many modern wireless routers are already single-band, dual-band, and now router companies are launching tri-band routers. But do they speed up your Wi-Fi? If you've heard the phrases "single frequency", "dual frequency" or "triple frequency" but don't know what they mean, we can help you understand it all. 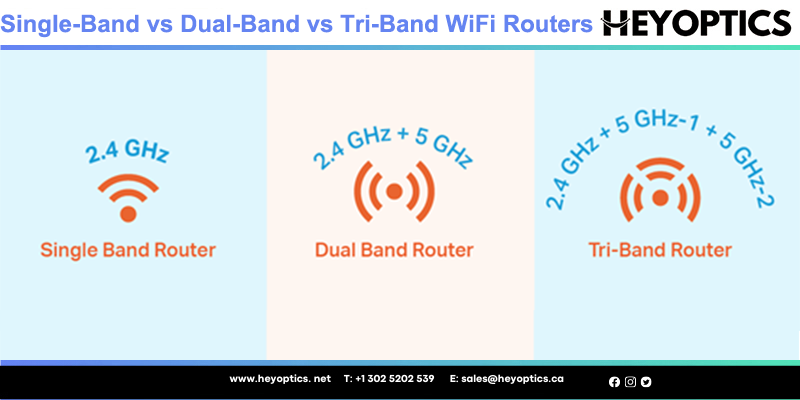 Way back in 1999, the Institute of Electrical and Electronics Engineers (IEEE) introduced the idea of wireless standards—that's what those "802.11" numbers that you see on your WiFi-enabled gear represent. These standards are rule books that make sure routers and online devices are on the same page, ensuring that your Roku plays just as nicely with your router as your tablet does.
A single-band router is limited to, as you might've guessed, just one frequency band—the 2.4 GHz frequency band, to be exact. Older, single-band routers operate on the 802.11g standard (introduced in 2003), which caps data speeds at 54 Mbps. The iPhone 3G and 3Gs use this standard, for instance.
More likely, though, a single-band router operates on the (somewhat) newer 802.11n standard, also known as "Wireless-N." Wireless-N routers on a 2.4 GHz band offer theoretical speeds of up to 800 Mbps—"theoretical" meaning that you'll probably never see these speeds during day-to-day use, given real-world factors such as your Internet service limitations.
Though single-band, 2.4 GHz routers are accessible and low-priced, they come with a fair share of drawbacks, given the natural progression of WiFi tech. It breaks down something like this:
Single-Band Pros
Single-Band Cons

In addition to supporting the 2.4 GHz Wireless-N standard, dual-band routers support the 5 GHz frequency band, operating on the newer 802.11ac standard. At their theoretical best, that means they support aggregate speeds up to 2,167 Mbps or more.
For most households, 5 GHz connectivity is what makes these routers shine. Imagine that the 2.4 GHz and 5 GHz bands are freeways, and each of the WiFi networks in your router's vicinity is a semi-trucks. Having been around for more than a decade, there are a whole lot of 2.4 GHz semi-trucks out there, and that makes for speed-clogging traffic jams. On the other hand, the 5 GHz freeway is fairly open because it’s newer, making for a faster, more stable connection. This is especially crucial if you live in a well-populated city or a big apartment building.
Dual-Band Pros
Dual-Band Cons

Right off the bat, tri-band routers—which just hit the scene a few years ago—are capable of multiple Gigabit speeds, up to 2166 Mbps on each 5 GHz band. And here's where the "tri" in "tri-band" comes into play: They feature one 2.4 GHz band and two 5 GHz, bands.
With two radio freeways for your 5 GHz data to travel on, tri-band routers reduce signal interference even more than dual-band devices.
Tri-Band Pros
Tri-Band Cons 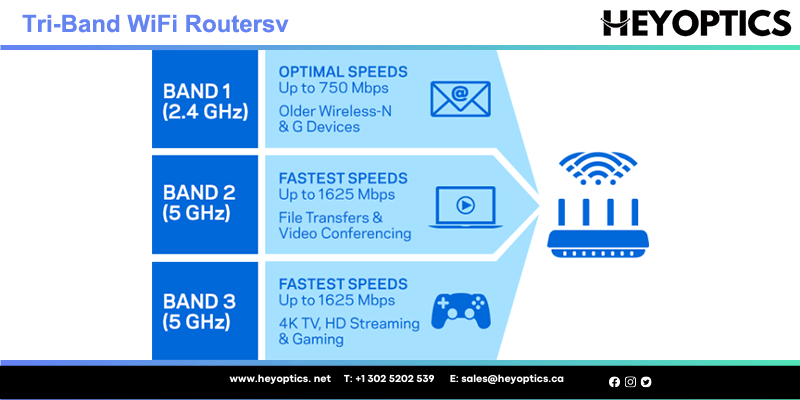 Single-Band vs Dual-Band vs Tri-Band WiFi Routers:: What’s the Difference?

Single band routers are becoming extinct in favor of faster speeds and better overall performance. The dual-band router can certainly offer that, but brace yourself – the tri-band router is destined to shake things up very soon here.
A tri-band router may seem like the Hercules of routers, but you may not be getting much value out of it given the state of your home network and devices, and considering the equally Herculean prices, a dual-band running 802.11ac may be a good bet. If you do have internet speeds greater than 600 Mbps and have many devices using Wi-Fi and many other wireless devices, then the tri-band might amp up your speeds significantly. If your ISP only gives you throttled speeds of 15 or 20 Mbps, or you’re on a bit of a budget, and you don’t have that many devices, a single-band N-router would suffice and not break the bank.
Share Tweet Pin it
Tumblr
Previous
How to Calculate the Fiber Link Budget?
Next
QSFP-DD vs OSFP: What Are the Differences?
Related articles