When choosing the appropriate cable category to support your network, be aware that there are different ratings in each category. A properly installed higher-grade cable will allow for a higher margin of error, ensuring optimal performance today and additional buffering to support future technologies. However, there are many types of Ethernet cables in the market, such as Cat5, Cat5e, Cat6, Cat6a, Cat7, Cat7a, Cat8, etc. So many different ethernet cables can be overwhelming. Which ethernet cable should I choose? Proper selection of Cat5e, Cat6, Cat6a, and Cat7 Ethernet cables will best support current and future network speed requirements. But which type of ethernet cable to buy?

What is a Cat5 Ethernet Cable?

Also known as an Ethernet cable or LAN cable, Cat 5 or Category 5 is a network cable consisting of four pairs of twisted copper wires terminated by RJ-45 connectors. cat 5 cables are used in home and business networks and provide data transfer speeds of up to 100 Mbps. the maximum recommended length of a Cat 5 cable is 100 meters. While some offices set up “a long time ago” may still use Cat 5, Cat 5 Ethernet cables are obsolete and have been replaced by Cat 5e Ethernet cables, a more powerful and enhanced upgrade cable. In terms of performance, the Cat5 Ethernet cable has a standard bandwidth of 100 MHz and a maximum length of 100 meters, providing connection speeds of up to 100 Mbps. By modern standards, this is quite low, usually starting at 1 Gbps. After all, the point of a hard-wired connection is not only reliability but also speed. Cat5 Ethernet cables consist of two twisted-pair, color-coded copper pairs. They are less durable and less resistant to interference than other categories of Ethernet cables because Cat5 cables do not have insulation to provide better protection.

What is a Cat5e Ethernet Cable?

Cat5e (Cat5 enhanced) is the cheapest, but it is also the slowest. It supports data transmission speeds of one gigabit per second (Gbps), a frequency of 100 MHz, and a maximum length of 328 feet. The crosstalk between the wires in the cable is reduced, thereby reducing the chance of interference and transmission errors. Of course, it will provide capable performance for most applications today, but Cat5e also leaves fewer opportunities for future upgrades.

What Is Cat6 Ethernet Cable?

Cat6 cable is otherwise called “Category 6” Ethernet cable. It consists of four pairs of copper wire which supports up to 10 Gbps of Ethernet connection. Normally, it supports a maximum transmission speed of up to 1 Gbps within 100m. While Cat6 cable supports 37-55 meters (depending on crosstalk) when transmitting at a speed of 10 Gbps. It can transmit signals up to 250 MHz in frequency, which indicates how often the signal can pass through the cable. What’s more, it uses the RJ-45 standard connector and is backward compatible with its previous versions such as Cat5 and Cat5e. 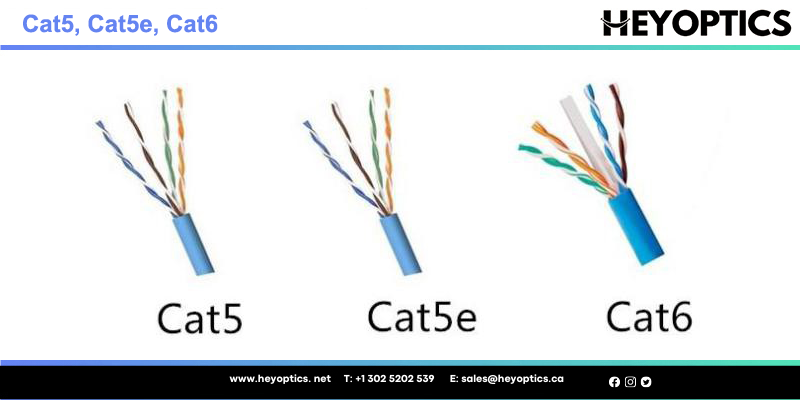 What is a Cat6a Ethernet Cable?

Cat6a cable is an enhanced version of the Cat6 Ethernet cable. This enhanced Cat6 cable includes a higher standard bandwidth, starting at 500 MHz and going up to 550 MHz. this standard bandwidth is twice that of Cat6, which carries important consequences. Chief among them is that Cat6A can maintain a data rate of 10 Gbps over distances of up to 100 meters. That’s about twice the difference of Cat6. If you want to set yourself up for a successful long-term Gigabit Ethernet network, Cat6a (Category 6 Enhanced) is the right choice. Yes, it’s more expensive than Cat5e or Cat6, but as the technology evolves, the hardware you’ll connect to your network will only get more complex, not less. cat6a supports the same 10Gbps transmission speed as Cat6, but up to 328 feet and at 500MHz. of course, there’s less crosstalk compared to Cat6. Cat6a Ethernet cables also come with a stronger jacket that not only reduces but eliminates AXT (extraneous crosstalk) and improves the quality of the SNR (signal-to-noise ratio). Cat6a cables have reduced crosstalk and are more likely to give you the maximum possible speed of 10Gbps.

What Is Cat7 Ethernet Cable?

Cat7 cable is otherwise called “Category 7” Ethernet cable. It supports high-speed Ethernet communication up to 10 Gbps. The Cat7 cable is backward compatible with Cat6, Cat5, and Cat5e cable categories. It offers a 100-meter 4-connector channel using shielded cabling and has been designed to transmit signals at a frequency of 600 MHz. Cat 7 cables require twisted wires to be fully shielded known as screen shielded twisted pair (SSTP) or screened foiled twisted pair (SFTP) wiring, which eliminates alien crosstalk while significantly improving noise resistance. Thus it allows the user to get higher possible speeds even with longer cables.

What is a Cat7a Ethernet Cable?

Cat7a Ethernet cable refers to “Category 7 Enhanced”, or Category F enhanced products. This was introduced by ISO 11801 Edition 2 Amendment 2 (2010) and defines frequencies up to 1000 MHz.Category 7a cables may have been initially introduced as a future-proof step to meet the expected widespread adoption of the 40 Gbps Ethernet standard. -However, in 2016, a new approval meant that this responsibility was effectively handed over to Cat8 cables designated for 2000 MHz. As a result, cable Cat7a is not officially supported by very many devices as a standalone revision. Cat7a Ethernet cables are typically slightly thicker because of the additional shielding designed to increase the speed at which they deliver 1000 MHz. Even so, Cat7a is not technically recognized by most of today’s standards and therefore has very limited applications. This is because it offers similar speeds and distances to Cat7 in most everyday applications and environments. Both standards are considered suitable for demanding usage scenarios, such as high-performance data center applications. 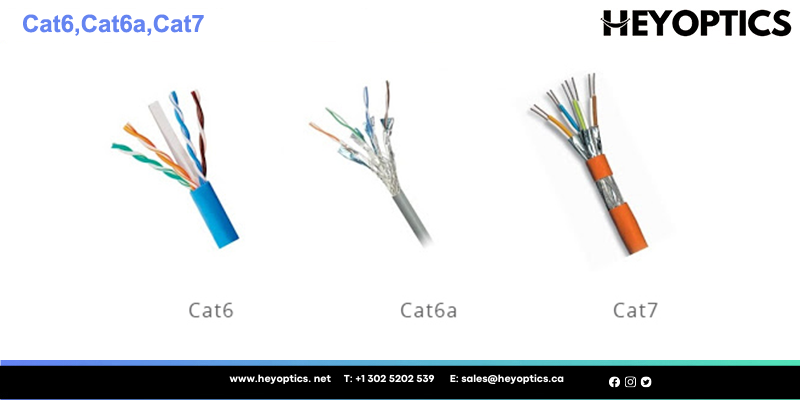 What is a Cat8 Ethernet Cable?

Cat8 Ethernet cables have made great leaps in performance and speed. Cat8 Ethernet cable can support frequencies up to 2GHz (or 2000Mhz), which is more than twice that of Cat7. More importantly, the Cat8 Ethernet cable can achieve the speed of Cat8.1 up to 25Gbps and Cat8.2 up to 40Gbps. This is a huge upgrade to the speed of its predecessors–especially it can even support higher data transmission rates within a short distance of 30 meters. Cat8 Ethernet cable is also designed as shielded wiring to reduce interference. This is achieved through the use of S/FTP, which refers to shielding with foiled twisted pair cables. The working method of this shielding is that the twisted pair is first wrapped in aluminum foil, and then covered by a sturdy 4-pair woven net, which is flexible and highly durable. The braided screen design enables better grounding and usually achieves the highest performance of copper cables. Like all other Ethernet cables, Cat8 uses RJ45 connectors and is backward compatible. Finally, at its extreme speed, Cat 8 is not really designed for home use. At least not yet. To take full advantage of the speed of Cat 8, you need not only a suitable Cat 8 cable, but also compatible switches, routers, and network cards to support it. So similar to Cat7, it is most suitable for industrial use. 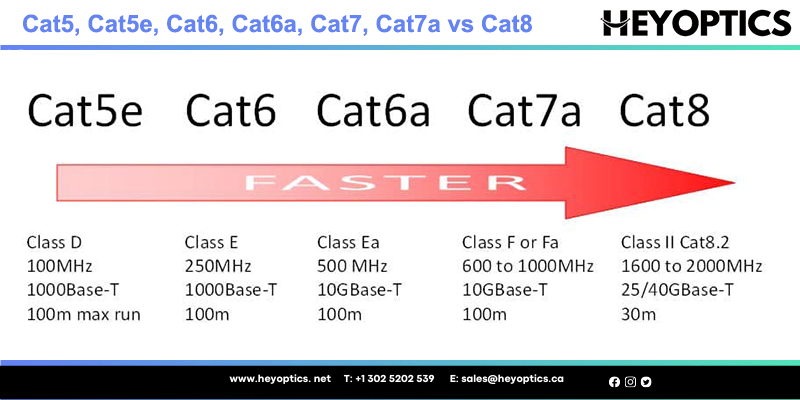 How to choose Cat5 vs Cat5e vs Cat6 vs Cat7 vs Cat8 cable? The above highlights the main factors to consider when choosing the right Ethernet cable. The newer version of the cable performs better than the previous one in terms of speed and bandwidth, but the more important thing you should keep in mind is that the cable supports different speeds over different distances. Taking a Cat6 cable as an example, the maximum transmission speed of 100 meters is 1 Gbps, and the maximum transmission speed of 37-55 meters is 10 Gbps. Cat6a Ethernet cables can reach 10 Gbps over distances up to 100 meters. So you can choose the appropriate network cable according to the cable length and network speed you need.If you are a small to medium business with dozens of computer users and servers, then Cat6 and Cat6a cables are the minimum recommended requirements. It's affordable, offers enough bandwidth for typical business network traffic, and has the best price/performance ratio. And for high-speed switch-to-switch communication in a 25G or 40G network, Cat7 or Cat8 cable is a better choice, albeit expensive, but you get faster speeds, higher durability, and lower interference rates, and ultimately help you ensure productivity.