Underground tracer wire is designed to locate the underground pipes after they are buried, which are required by many building codes for the gas and sewer lines into buildings. When first introduced, it needed to do little more than find buried water, gas, or sewer lines. Today, locating has become more complex as telecommunications cables joint utility lines in the underground environment. Fortunately, today’s underground fiber optic cable locator relies on the same basic technology found in their early counterparts – injecting an electrical signal onto the cable being located.

Underground cable locator is a commonly uesd underground fiber optic cable locator, which consists of two parts – a transmitter and a receiver. The transmitter puts an electrical signal onto the cable or pipe being traced, while the receiver picks up the signal, allowing the locator operator to trace the signal’s patch and follow the cable being located.
While the basic technology for locating hasn`t changed much, the ways for getting the signal onto the cable have. In addition to passive signals, which do not require the use of a transmitter, the three most common methods of sending signals are direct connect, general induction, and inductive coupling. In the inductive coupling method, the cable must be grounded to form a complete circuit path. 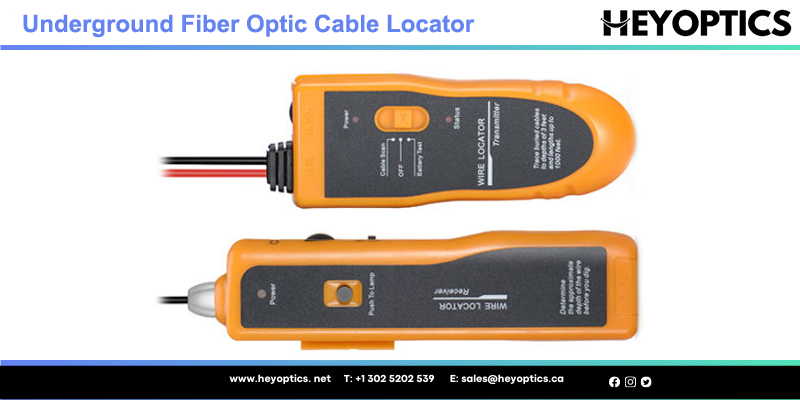 How to Use Underground Fiber Optic Cable Locator

Installing a tracer wire creates a safer work environment for excavators or homeowners in the future. Make sure to leave several inches of tracer wire above ground for future use. See the details on how to install underground tracer wire:

Holder the tracer wire at the start of the pipe near the street and fasten it to the pipe by wrapping it with electrical tape.

Roll up the tracer wire along the pipe, taping it to the pipe every 5 feet.
Run the wire up the pipe to the point where it exits above finished grade. Cut the wire so there is 6 to 12 inches of wire above the ground.
Fasten the wire close to the end of the pipe to ensure it is visible for future use.

Tracing buried cables is a relatively simple procedure that comes in handy in outside-plant environments, where you need to know the location of a cable before the backbone rips up earth near the buried cable. Locators can also find the problem-stricken telecommunications cables. What sets these tools apart from their inside-plant counterparts is that they need to be able to differentiate the target cable from other nearby cables and underground utilities and provide an estimate of depth.