Passive DWDM vs. Active DWDM, which one to choose?

DWDM, short for dense wavelength division multiplexing, refers to an optical multiplexing technology used to increase bandwidth over existing fiber networks. DWDM works by combining and transmitting multiple signals simultaneously at different wavelengths on the same fiber. It has revolutionized the transmission of information over long distances. Generally speaking, DWDM can be divided into passive DWDM and active DWDM. The differences and selections between passive DWDM vs. active DWDM will be explained in this article. 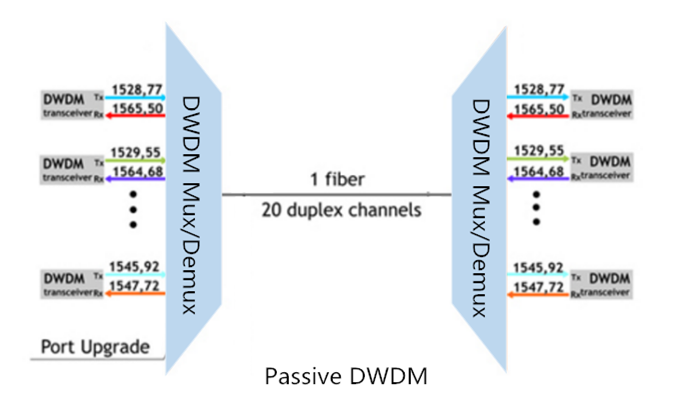 DWDW is short for dense wavelength division multiplexing. It is an optical multiplexing technology used to increase bandwidth over existing fiber networks. DWDM works by combining and transmitting multiple signals simultaneously at different wavelengths on the same fiber. It has revolutionized the transmission of information over long distances. DWDM can be divided into passive DWDM and active DWDM. This article will detail these two DWDM systems.

Active DWDM systems commonly refer to as a transponder-based system. They offer a way to transport large amounts of data between sites in a data center interconnect setting. The transponder takes the outputs of the SAN or IP switch format, usually in a short wave 850nm or long wave 1310nm format, and converts them through an optical-electrical-optical (OEO) DWDM conversion. When creating long-haul DWDM networks, several EDFA amplifiers are installed sequentially in the line. The number of amplifiers in one section is limited and depends on the optical cable type, channel count, data transmission rate of each channel, and permissible OSNR value.
The possible length of lines when using active DWDM system is determined not only with installed optical amplifiers and the OSNR value, but also with the influence of chromatic dispersion—the distortion of transmitted signal impulses, on transmitted signals. At the design stage of the DWDM network project, permissible values of chromatic dispersion for the transceivers are taken into account, and, if necessary, chromatic dispersion compensation modules (DCM) are included in the line. DCM introduces additional attenuation into the line, which leads to a reduction of the amplified section length.

Both passive DWDM and active DWDM have their own pros and cons.

Pros and Cons of Passive DWDM

Less complex: passive DWDM isn’t complex at all. It really plugs and play, and there is nothing to provision.

Even though passive DWDM has two main benefits, it still has the drawback.

Control: if you need to change a wavelength or connection for whatever reason, your option is limited to taking it out of service and disconnecting the physical cabling as the wavelength is tied to the optic.

Pros and Cons of Active DWDM

Active DWDM can fit more wavelengths onto a single fiber pair. The composite signal that is sent over a single fiber pair can carry more bandwidth than a passive of the same size could. In turn, you don’t need as much physical fiber between your two sites. This is advantageous when distance is a problem because it allows you to get more out of a single fiber pair as opposed to passive.

Active setups grant you more control over your optical network. You can dynamically re-tune wavelengths without dropping connections. It’s transparent to whatever is riding on that wavelength. Moreover, active DWDM can be easier to scale as your network grows. You can fit more wavelengths on the fiber.

Active DWDM has drawbacks, too.

Configuration: depending on your vendor, the configuration can be a serious undertaking, and require a solid understanding of optical networks. There are many more components in active builds. DWDM necessarily requires transponders, further, after muxing the signals, they typically need active amplification to have any interesting reach. Without this, you’re only going a relatively short distance.

Passive DWDM vs active DWDM, the selection is normally dependent on several factors: distance requirements; network scalability; initial installation & future management; the expense. If there are no particular requirements for the distances and future network upgrades, passive DWDM that provides user-friendly and cost-effective solutions is suitable for those with a tight budget. If it is required for long-haul applications and convenience when changing and updating in the predictable future, the active DWDM solution may fit for those with high bandwidth demands. Note that IT knowledge for configuration is needed in this kind of situation.

Summary
No matter passive DWDM or active DWDM, choose the one that suits your network best. Knowing their own features can help you better judge which one you need. DWDM mux/demux is a must in both passive DWDM and active DWDM. However, a DWDM networking deployment covers more than just DWDM muxes/demuxes. Common Solutions for A Secured DWDM Network will introduce the typical DWDM transport network solutions for you.