Building a network with fewer cables has emerged as a key requirement in recent years. This is because cable clutter can lead to several confusions and accidents, if not managed properly. To accomplish this, various technologies have been developed over the years. HDMI over Ethernet is one of those technologies that have gained traction in recent years. Now, you may ask how does this technology help in superior signal transmission while using fewer cables? This post seeks an answer to this question and covers everything you would like to know about this technology.

HDMI and HDMI Over Ethernet Discussed in Detail

HDMI stands for High Definition Multimedia Interface and it is a replacement for analog standards. An HDMI video/audio interface facilitates the transmission of compressed and uncompressed digital audio files or uncompressed video files from an HDMI-compliant input to a suitable output. The advanced versions of HDMI can support 4K and high definition 3D signals in high digital quality as well as can support up to 32 channels of surround sound in a single cable.
HDMI distribution is achieved by AV devices, such as extenders, switches or matrices, that accept a single input signal and distribute the same signal to multiple isolated outputs and/or destinations without ground loops or signal degradation. This distribution is usually performed using devices such as switches, extenders, matrices, and so on, and special Ethernet-enabled HDMI cables. All these devices receive a single input signal, which is distributed to multiple outputs, without any signal degradation. These outputs may be distributed at the same location or across multiple destinations. The Ethernet HDMI cable can support high-speed data of 100 Mb/seconds, which is a required speed of home networking applications.

Is HDMI Over Ethernet Suited for Long Distance Transmissions?

Yes, it is suited for a long-distance transmission. Distribution of video signals using coax cables or analog video cables comes with its own set of challenges such as frequency losses. These cables also lead to the deterioration of signals. Here, IP extension makes a difference. HDMI over Ethernet uses fiber optic cables and AV/KVM extension devices to transmit compressed video or audio files over long distances at a high resolution. Fiber optic cables are immune to electromagnetic interference and they facilitate signal transmission to any distance without any degradation. Another great thing is that the Ethernet-compatibility of HDMI cables does not affect unencrypted or encrypted data; rather, it allows users to share or access data across Internet-connected devices.
High-end audio visual over Ethernet systems installed in areas such as stadiums or outdoor screens employ compression algorithms such as H.264 to send data packets over long distances. This algorithm when combined with Ethernet-enabled HDMI technology enriches the visual experience of spectators. The algorithm also helps reduce the signal delay to three or two frames per second. Along with this, IP-driven extenders and Ethernet switches are used for ensuring disturbance-free long-distance transmissions. Generally, managed Ethernet switches are considered for this combination because they enable users to have a better control over the network.
Owing to the increasing demand for HDMI over Ethernet applications, HDMI has rolled out new connectors that support various speeds. The following are five different types of HDMI connectors that support standard and HDMI over Ethernet applications: 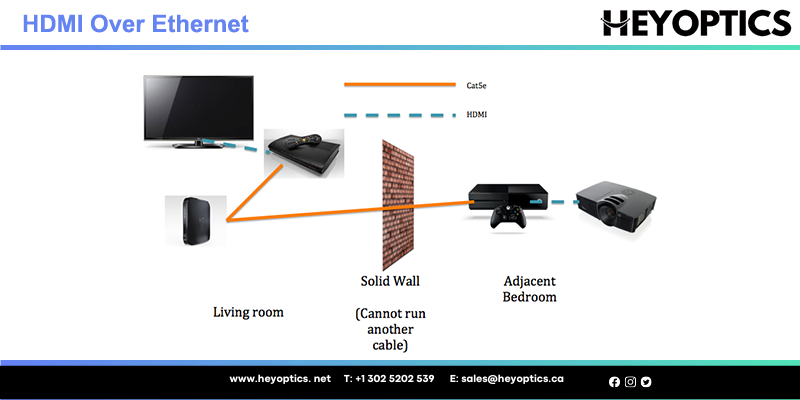 How To Send Video Over Ethernet

How and When To Use Ethernet Over HDMI

Multicasting HDMI allows to distribute video and audio to any screen on a signage network. A single transmitter can deliver multimedia to hundreds of displays with no need to run dedicated video links from a back room to displays in lobbies. By combining matrix and video extension solutions, USB extenders, and video and peripheral extension and switching (such as in KVM setups) gives users an almost endless number of configurations for their applications, including touch-interactive signage displays and information and wayfinding displays in retail, healthcare, education, public offces and more.

An IP-based controller applicance can be used to turn any video distibution setup into an AV matrix switching or even video wall control setup that enables users to place any content from any source to any display. When multiple AV receivers are combined into a video wall, users can create presets, specific content zones and control content remotely. The system’s mobile support enables users to easily access and activate presets from a cell phone or tablet device.

A video matrix switch, also called a crosspoint switch, is a type of switch that connects multiple inputs to multiple outputs and can be configured to combine supported types and numbers of inputs (e.g. HDMI content player) and outputs (screens). Each input on the switch can be routed to any output source or receiver, or the same input can be routed to all outputs, or any combination in between. For example, an 8 x 8 matrix switch can route 8 inputs to 8 outputs, 1 input to 8 outputs, or any combination up to 8. This eliminates the need to manually move cables to display video from different sources on different screens. It is most commonly used now with HDMI video.
In a video matrix switching setup you can switch multiple digital or analog sources to multiple digital displays in any combination. Like this, HDMI signals can be amplified and easily routed from several video sources (e.g. PCs, DVD players, tablets) to various display devices (e.g. LCDs, projectors, etc.) and speakers.

Firstly, you would need two devices that support HDMI Over Ethernet. These devices are usually termed as HEC compatible. Then you would need an HDMI cable with Ethernet and any of the following devices depending on the requirement.

ot only does HDMI have the ability to transfer uncompressed video and multi-channel audio through one cable, but it is now a widely utilized connector on essentially all new high-definition televisions and components. After gaining an understanding of the HDMI Over Ethernet technology and its dependability on HDMI over Ethernet products, it is important to source them from a trusted player.
Share Tweet Pin it
Tumblr
Previous
Know About Digital Diagnostic Monitoring Function in Ethernet Switches
Next
What factors need to be considered when using industrial switches?
Related articles