By now, most of us are familiar with what an HDMI cable is. This cable connects your TV or monitor to all your sound bars, DVD players, game consoles, laptops, and more. However, not all HDMI cables are created equal. While HDMI 2.0 has been around for years, it has recently been updated to HDMI 2.1. Here's everything you need to know about the difference between HDMI 2.0 and HDMI 2.1, and which one should you choose for your home theater or gaming PC?

HDMI 2.1 is a landmark revolution of the standard, rather than the incremental evolutions of the past few generations. Where HDMI 2.0 built upon HDMI 1.4 by improving color spectrum support, increasing transmission and data rates by over 50 percent, and doubling the support for audio channels, HDMI 2.1 turned the standard on its head.
HDMI 2.1 supports a maximum transmission bit rate of 48 Gbps, compared with HDMI 2.0's mere 18 Gbps. HDMI 2.1 cable vs HDMI 2.0 cable on max effective data rate is a similar wash, with HDMI 2.1 supporting up to 42.6 Gbps, where HDMI 2.0 manages just 14.4 Gbps. All that additional bandwidth opens up the HDMI standard to higher resolutions and refresh rates than it ever had before, making it a true competitor for the high-end DisplayPort standard.
HDMI 2.1 offers native support for 4K resolution at high refresh rates like 120Hz, and even up to 144Hz. It also enjoys better support for 5k resolution at up to 60Hz (where HDMI 2.0 needed compression technology to make that viable) and 8K at 30Hz refresh rate. Previous generations of HDMI cables weren't capable of compression, but with the new, lossless DSC 1.2 now supported by the new HDMI standard, even higher resolutions and refresh rates are possible.
With DSC 1.2 enabled, HDMI connections can handle up to 10K resolution at up to 120Hz. The same goes for 8K and 5K resolution, with 4K resolution playable at up to 240Hz when compression is used.
These are major advancements of the HDMI standard and put HDMI 2.1 vastly ahead of HDMI 2.0 in terms of its raw power and capabilities. HDMI 2.1 vs. 2.0 is a blowout when it comes to performance.

The main difference between HDMI 2.0 and HDMI 2.1 is that the newer specification has a higher bandwidth capacity. That means HDMI 2.1 can transfer more data at a time, which allows it to support higher resolutions, faster refresh rates, and other features.
HDMI 2.0 vs 2.1: Video Resolution
HDMI 2.1 supports video resolutions up to 10K or 8K uncompressed, while HDMI 2.0 can only support resolutions up to 4K. That means you will be able to see more detail, and images will look sharper when you use an HDMI 2.1 cable, but only if the TV, video, and media player are all compatible with higher resolutions.
However, an HDMI 2.0 cable only lets you watch 4K content at 60 frames per second, which isn’t fast enough for some content. So, if you have a 4K TV, you still might want to opt for an HDMI 2.1 cable.

HDMI 2.1 supports refresh rates up to 8K at 60 Hz (Hertz) or 4K at 120 Hz, while HDMI 2.0 only supports 4K at 60 Hz. Refresh rate refers to how many times the display refreshes the image per second. A high refresh rate generally leads to smoother motion, especially when gaming.

HDMI 2.1 and HDMI 2.0 both support a feature called HDR (high dynamic range), which increases the range of light and color that a video can display. However, only HDMI 2.1 formally supports dynamic HDR, which increases the picture quality even more.
With static HDR, you can see more detail in the shadows and highlights of an image, but there is only one set of information to define the light levels of an entire video. So, if one scene in a movie is too bright, it can make the rest of the movie look a little dark.
With dynamic HDR, the brightness range of a video can be analyzed frame-by-frame, which leads to more life-like images. However, you can only use this feature if your TV or monitor supports dynamic HDR, such as HDR10+ or Dolby Vision. 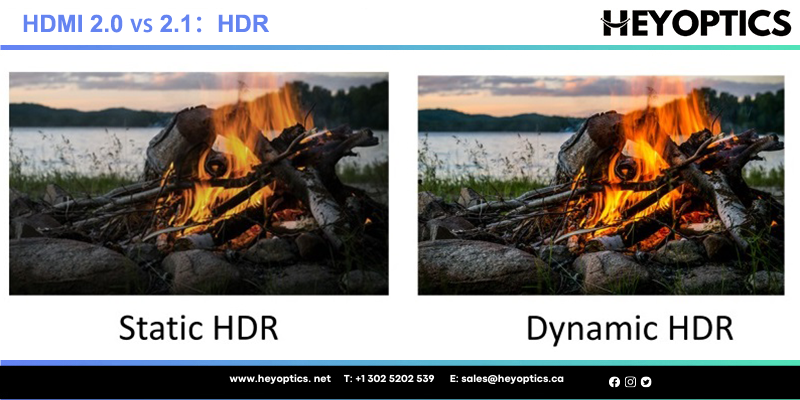 HDMI 2.1 and HDMI 2.0 both support a feature called ARC (audio return channel), which allows a single cable to send and receive audio signals from your TV to a soundbar or AV receiver. However, only HDMI 2.1 supports eARC (enhanced audio return channel).
With ARC, you can listen to surround sound audio, but it will be compressed. On the other hand, eARC has a higher bandwidth capacity, so it supports uncompressed surround sound, including audio formats like DTS Master, DTS:X, Dolby TrueHD, and Dolby Atmos 3D surround sound.

One of the biggest differences between HDMI 2.0 and HDMI 2.1 is noticeable when gaming. Only HDMI 2.1 has advanced features like VRR (variable refresh rate), which reduces screen tearing, and ALLM (auto low latency mode), which reduces lag.
HDMI 2.1 comes with VRR built-in, which allows the refresh rate of your display to match the frame rate of your game in real-time. Without this feature, your display will sometimes try to show information from two frames at once. This causes screen tearing, which is usually characterized by a horizontal break in the image.

HDMI 2.1 cables will only help you get the best (audio and video bandwidth) when used with an HDMI 2.1 capable source system and monitor or TV. It doesn't magically increase the bandwidth of HDMI 2.0 capable systems and monitors. Sure, it gives you a future-proof cable in your hands, but you'll only get the most out of it if you're using a source and display system with an HDMI 2.1 port.
HDMI 2.1 is only worth it if you have a 4K TV or connect your monitor to an eARC-enabled soundbar or AV receiver. Plus, if you're a gamer, HDMI 2.1 offers many worthwhile features, even if you don't have a 4K monitor.
At the same time, the latest TVs or game consoles that support HDMI 2.1 (like the PS5 or Xbox Series X) won't provide the best output over an HDMI 2.0 cable. So you lose higher quality audio, higher refresh rates, and other features like Dolby Vision or Dolby Atmos.
And, because HDMI 2.1 is backward compatible, cables with the latest specs are guaranteed to work with any device. On the other hand, HDMI 2.0 may not work with some newer TVs and sound bars, so you may need to buy newer specs for future home theater or gaming PCs.
Share Tweet Pin it
Tumblr
Previous
4K vs 1080p: What's the difference?
Next
HDMI 2.1 vs DisplayPort 1.4: What's the Difference?
Related articles