Ethernet networks are expanding and their designs are evolving and getting complex. The high capacity wide area networks (WAN) networks are introduced in telecommunication, business communication, industrial automation, and many other types of networking applications. However, owing to the intricacy of such networks, periodic maintenance, troubleshooting, and upgrades are performed in different phases. The networks are built in layers to ease maintenance-related issues. Multiple layers consist of different devices integrated.
The layers of networks may consist of devices like transmitters, receivers, media converters, network switches, etc. Out of all the devices, the network switches play important role in managed Ethernet networks. The switches contribute to directing the data and are responsible for the transmission of signals to the addressed devices only.
Different types of Ethernet switches perform different roles in the layers of high-capacity networks. Core switches, distribution switches, and access switches are the common types of switches used in layer-based or hierarchy Ethernet networks. This post mainly explores the confusing problem: core switch vs distribution switch vs access switch.

An Overview of Hierarchy Ethernet Networks

The hierarchy Ethernet network is a three-layer integrated setup of networking devices. These networks are designed with three tiers that facilitate strategic installation, management, maintenance, and so on. The strategic design of a hierarchy network may comprise more than three layers, however, the base foundation of this network consists of three layers i.e.; the core layer, distribution layer, and access layer. 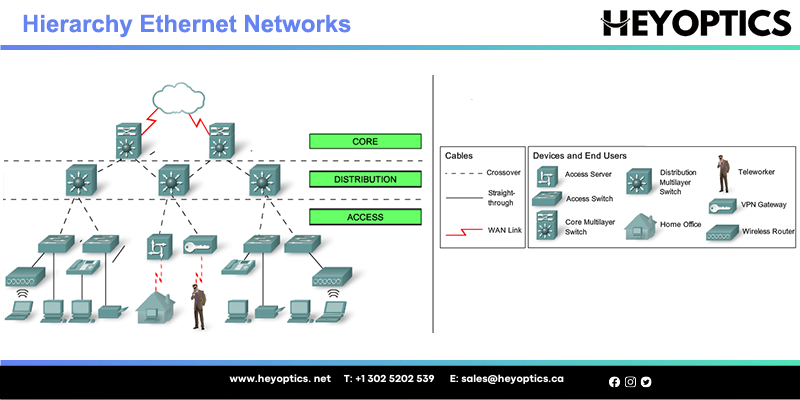 What Is Core Switch?

A core switch is not a certain kind of network switch. It refers to the data switch that is positioned at the backbone or physical core of a network. Therefore, it must be a high-capacity switch to serve as the gateway to a wide area network (WAN) or the Internet. In a word, it provides the final aggregation point for the network and allows various aggregation modules to work together.

Owing to the importance of core switches, the quality and performance of the core network switches must be tested. To ensure that the switches can perform tasks of the core layer or collapsed core layer, the following parameters should be checked.

What Is Distribution Switch？

The following parameters are essential for a distribution switch to perform effectively in layer 2.

The access switch is generally located at the access layer for connecting the majority of devices to the network, therefore it usually has high-density ports. It is the most commonly-used gigabit Ethernet switch that communicates directly with the public Internet, mostly used in offices, small server rooms, and media production centers. Both managed and unmanaged switches can be deployed as access layer switch.

Since the access layer is the most interactive layer of the hierarchy network, the following parameters of access switches must be confirmed.
Considering all the above-mentioned factors, core switches, distribution switches, and access switches can be chosen. However, to ensure the efficiency of the network, the quality of switches and performance parameters should be verified. 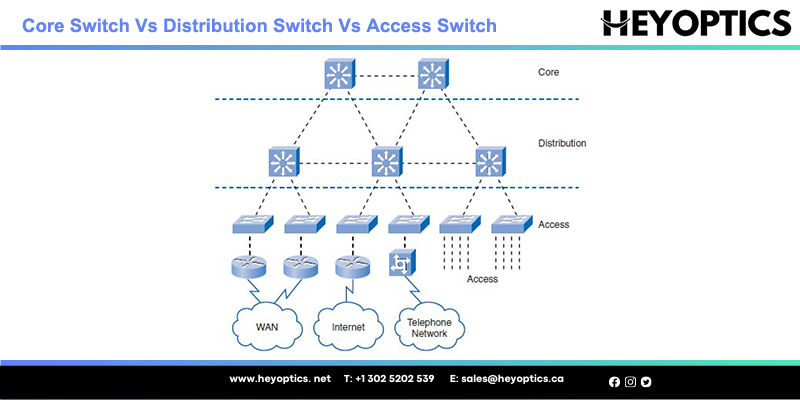 The switches may co-exist in the same network, and coordinate with each other to contribute to an unrestricted network speed with each layer switch performing its duty. Well, what’s the difference: core switch vs distribution switch vs access switch?

The lower levels the switch dwells in, the more devices it connects to. Therefore, a big gap in ports number exists in the access switch and core switch. Most access switches need to connect various end-user equipment ranging from IP phones to PCs, cameras, etc, While the core switch may be just linked with several distribution switches. Meanwhile, the higher layer the switch lies in, the faster port speed it requires. Access switch is to core switch what river is to the ocean, as the latter one has the large throughput to receive the data packets from the former one. Most modern access switches come with 10/100/1000Mbps copper ports. An example of this is FS S2800–24T4F 24 port 100/1000BASE-T copper gigabit Ethernet switch. While core switches commonly have 10Gbps and 100Gbps fiber optic ports. 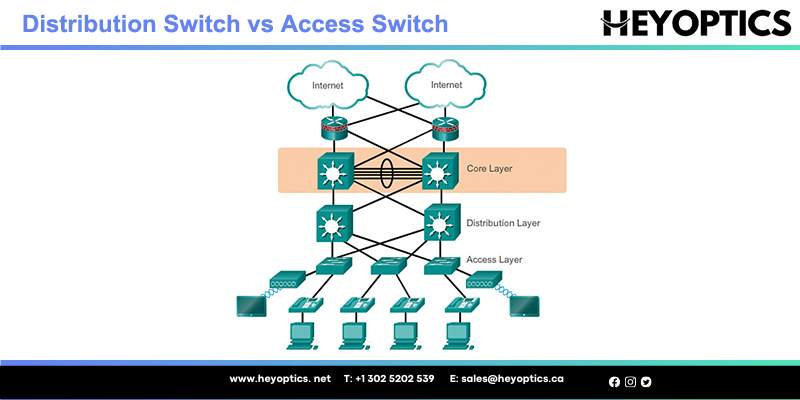 How to choose: core switch vs distribution switch vs access switch. To sum up, the access switch facilitates devices to the network. The distribution switch accepts traffic from all the access layer switches and supports more high-end features. And the core switch is responsible for routing and forwarding at the highest level.
Complex Ethernet networks feature a hierarchy comprising multiple layers. The core layer, distribution layer (layer 2), and access layer (layer 3) are the three layers used to build hierarchy networks for industrial, domestic, and commercial data transmission. All three layers of the hierarchy network are introduced in this white paper along with the sole responsibility of each layer. Further different types of network switches used in these networks are discussed, namely, core switches, distribution switches (layer 2 switches), and access switches (layer 3 switches). Since the selection of appropriate switches is essential to building a high redundancy network, therefore important parameters of these switches are discussed individually.
Share Tweet Pin it
Tumblr
Previous
RJ45 Port VS RJ11 Port: What is the difference？
Next
How to Test Fiber Optic Cables？
Related articles