What is Fiber Optic Isolator?

Fiber optic isolator is a passive component used for fiber optic communications. As a magneto-optic device, the purpose of optical isolator is to allow light to be transmitted in only one direction. This helps prevent laser source from unwanted feedback which will damage the laser source or arouse unexpected laser problems, such as mode hop, amplitude modulate, frequency shift and so on. Therefore, isolator is an useful and indispensable device to reduce these effects. In the following parts, fiber optic isolator’s construction, operating principle and classifications will be discussed. 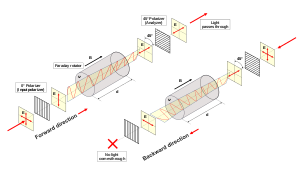 Isolators are placed in output circuits of devices with a high output light level such as laser diode transmitter and EDFAs, as shown in this picture.

Their function is to reduce the level of reflected light back into the laser diode or EDFA.

Optical isolators consist of a rod of Faraday material such as yttrium iron garnet (YIG), whose length is selected to provide 45° rotation. The Faraday material is sandwiched between two polarizers whose axes are tilted by 45° with respect to each other.

There are a few critical parameters that determine the performance of isolators.

Wavelength-dependence, especially for so-called narrowband isolators that are designed to operate in a spectral range narrower than 20nm. Isolators are described by peak reverse direction attenuation and by the bandwidth for which the isolation is within 3 dB of the peak value

Polarization mode dispersion (PMD). Isolators are constructed using high birefringent elements; and they are very prone to PMD – typically 50 to 100 fs, especially for single-stage designs. Double-stage isolators can be designed so that the PMD induced by the first stage is largely cancelled by the second stage.

Polarization-dependent loss (PDL). This degrades the performance of an optical isolator.

Construction of Optical Isolator
Fiber optic isolator includes three main parts of an input polarizer, a Faraday rotator with magnet, and an output polarizer. Only linearly polarized light can pass through the input polarizer into the Faraday rotator. The function of the Faraday rotator is to rotate the input light by a certain angle before it reaches the output polarizer. This allows the light in the forward direction to pass unimpeded. However, the light in the reverse direction will not be able to pass the optical isolator and is either reflected or absorbed. These three components of optical isolator skillfully work together and ensure the normal transmission of light signals.

The polarization independent isolator is made of three parts, an input birefringent wedge, a Faraday rotator, and an output birefringent wedge. Typically collimators are used on either side of the isolator. In the transmitted direction, the beam is split and then combined and focused into the output collimator. In the isolated direction the beam is split, and then diverged, so it does not focus on the collimator.

Operation of Optical Isolator
The operation of optical isolator is based on the Faraday effect which was discovered by Michael Faraday in 1842. Faraday effect refers to a phenomenon that the plane of polarized light rotates while transmitting through glass (or other materials) that is exposed to a magnetic field. The rotation direction depends on the direction of the magnetic field instead of the direction of light transmission.
According to different light directions, there are two types of operation modes. One is the forward mode and the other is the backward mode. The forward mode enables light enter into the input polarizer and become linearly polarized. When laser light reaches the Faraday rotator, the Faraday rotator rod will rotate by 45° polarization. Thus, the light finally leaves the output polarizer at 45° polarization. However in the backward mode, the light first enters into the output polarizer with a 45° polarization. Next, as it passes through the Faraday rotator, it continues to be rotated for anther 45° in the same direction. Then the light of 90° polarization becomes vertical to the input polarizer and can not leave the isolator. As a result, the light will be either reflected or absorbed. 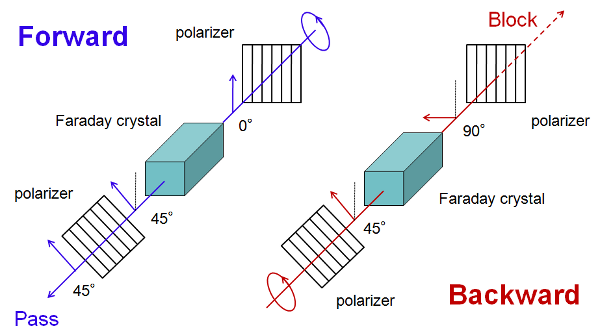 Conclusion
In summary, fiber optic isolator guarantees the stable function of laser transmitter and amplifiers by eliminating unnecessary lights. It also ensures a higher performance of light transmission. Using fiber optic isolator is no doubt a good choice for your network.