What are C-band and L-band in WDM?

Optical fibers are used to transmit information over long distances through light. As technologies have developed over time, fiber-based systems are becoming more popular for long-haul optical data transmission.

The capacity of fibers for data transmission is large and transmission capacities are very fast. The telecommunications industry use fiber optics because the attenuation is less at these wavelengths.

With optical fiber telecommunications system, a few transmission bands have been defined.

WDM (Wavelength Division Multiplexing) is a transmission technology that uses a single optical fiber to simultaneously transmit multiple optical carriers of different wavelengths in optical fiber communications. When the wavelength of light is different, the transmission loss in the fiber is also different. In order to reduce the fiber loss, it’s important to find the most suitable transmission wavelength. After a long period of exploration and testing, light with a wavelength of 1260nm~1625nm has the smallest dispersion signal distortion with low loss, which is the most suitable for transmission in optical fiber. there are several vendors have WDM devices, like ZTE Nokia and Huawei, Huawei DWDM device like OSN1800V, OSN6800, OSN8800 and OSN9800 all works as this technology.

The wavelength of fiber can be divided into several bands, each band is used as an independent channel to transmit predetermined wavelength. According to the ITU-T standards, single-mode fiber with the band over 1260nm is divided into O/E/S/C/L/U six bands. 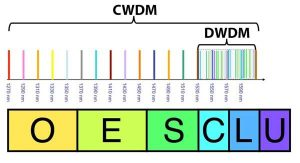 The wavelengths we use for transmission are used to test for losses. Everything designed or tested, when it comes to fiber optics, sits within the defined wavelengths.

Networks use light in the infrared region which has wavelengths longer than visible light. The defined optical wavelength bands sit between 850nm and 1675nm.

Optical wavelength bands are divided into the following:

What is o band?

The o-band is the original band 1260-1360 nm. O-band is the first wavelength band used in optical communication in history, and the signal distortion (due to dispersion) is the least.

The E-band (extended wavelength range: 1360-1460 nm) is the least common of these bands. E-band is mainly used as the extension of o-band, but it is rarely used. The main reason is that many existing optical cables show high attenuation in E-band and the manufacturing process is very energy-consuming, so the use of E-band in optical communication is limited.

What is S band?

The fiber loss in S-band (short wave band: 1460-1530 nm) is lower than that in o-band. S-band is used as many PON (passive optical network) systems.

What is C band?

The C-band ranges from 1530 nm to 1565 nm, representing the conventional band. Optical fiber has the lowest loss in C-band, and has a great advantage in long-distance transmission system. It is usually used in many metro, long-distance, ultra long-distance and submarine optical transmission systems combined with WDM and EDFA technology. As the transmission distance becomes longer and fiber amplifiers are used instead of optical to electron to optical repeaters, the C-band becomes more and more important. With the emergence of DWDM (dense wavelength division multiplexing) which can make multiple signals share a single fiber, the use of C-band has been expanded.

What is L band?

The L-band (long wavelength: 1565-1625 nm) is the second lowest loss wavelength band, which is often used when the C-band is insufficient to meet the bandwidth requirements. With the wide use of B-doped fiber amplifiers (EDFA), DWDM systems have been extended to L-band, which are often used to expand the capacity of terrestrial DWDM optical networks. Now it has been introduced to submarine cable operators to do the same thing - to expand the total capacity of the submarine cable.

What is U Band
Ultra-long wavelength band (U band) operates between 1635nm and 1675 nm. It is mainly used for network monitoring purposes.
Because the transmission attenuation loss of C-band and L-band is the minimum, the signal light in DWDM system is usually in C-band and L-band. In addition to the o-band to the L-band, there are two other bands, namely 850 nm band and U-Band (ultra long band: 1625-1675 nm). The 850 nm band is the main wavelength of multimode fiber communication system, combined with VCSEL (vertical cavity surface emitting laser). U-Band is mainly used for network monitoring.

According to different wavelength modes, WDM technology can be divided into WDM, CWDM and DWDM. The wavelength range of 1470-1610nm is usually used. DWDM channel spacing is more dense, using C-band (1530 nm-1565 nm) and L-band (1570 nm-1610 nm) transmission window. The wavelengths of 1310 and 1550 nm are generally used in ordinary WDM.
With the growth of FTTH Applications, C-band and L-band, which are most commonly used in optical network, will play an increasingly important role in optical transmission system.

Conclusion
But as broadband took off with video and other bandwidth-intensive applications became increasingly popular, the industry suddenly faced the immutable laws of physics—you can only squeeze so many 10G channels into a single fiber pair.
Deploying more terrestrial optical line systems was not always practical, and technologies such as 40G were not yet realities. The industry had to face reality: it needed to get more out of the fiber plants already deployed.

With the growth of FTTH Applications, C-band and L-band, which are most commonly used in optical network, will play an increasingly important role in optical transmission system.