The Secret of HDMI Cables

A history of HDMI Cable
The early days of HDMI actually date all the way back to 2002, when the founders of the technology first started working on the first iteration of it – HDMI 1.0. At the time, the idea was to create a new standard that would be backward compatible with DVI, which is a video-only standard that could be found on many monitors at the time.

Those founders weren’t exactly unknown inventors. Instead, they were a group of international companies that wanted to develop a new standard for the next few decades of video and audio transfer. Included in the original founders were the likes of Panasonic, Philips, Sony, Toshiba, RCA, and more, but the tech also had the support of content providers like Disney, Warner Bros. Universal, and more.

There were other goals for HDMI too. For example, the founders wanted the tech to be relatively small and add audio compatibility – making it easier to use for consumers. Soon after developing the standard, the first HDMI Authorized Testing Center was opening in 2003, followed soon by another center in Japan in 2004. Speaking of 2004, in that year, only a few years after the standard was first developed, a massive 5 million HDMI devices were sold.

What does HDMI mean?
You may well know what HDMI is, but what does HDMI mean? HDMI stands for High-Definition Multimedia Interface. It’s a bit of a mouth full. It makes sense, though. The standard is aimed at delivering high-resolution video and audio (or multimedia).

Of course, HDMI is often followed by a number – or the version number. Like many other standards, HDMI has been iterated upon over the years, and the higher the number, the more recent the version of HDMI.

HDMI Cables is the most common audio/video cable used today. Ushered in as the new standard for the digital age, HDMI was created in a joint project by numerous electronics manufacturers who wanted to set the stage as the switch from analog to digital technology was made. The development of HDMI cables began in 2002 and was completed the following year. Each following year saw more and more HDMI-ready products enter the market. Electronics equipped with HDMI ports became readily available across the world in the coming decade, with an estimated 3 billion HDMI-ready devices made by more than 1,300 companies as of HDMI’s 10-year anniversary in 2013.

While HDMI has been around for some time now, the technology has continued to evolve since its invention. The current standard for HDMI is version 2.0, which was introduced in 2013. This was the first version of HDMI fully capable of supporting 4k signals, which have become increasingly popular for televisions, computer monitors, and projectors. While newer versions of HDMI do exist, they exceed the specs most televisions and other electronics are currently capable of supporting. Since version 2.0 cables are more cost-effective to produce, manufacturers have stuck with them as the standard for the time being. Version 2.0 will eventually become outdated but for the time being, they are considered more than adequate.

While HDMI is certainly the most popular audio/video cable for electronics, it is not the only choice available. DisplayPort is HDMI’s main competitor, also being a digital audio/video cable. While DisplayPort is a little bit better than HDMI, it was designed specifically for use with computer monitors. It is very rare to see DisplayPort on other electronics like televisions or projectors. DVI is an older video-only cable that can be digital or analog, depending on the type of DVI, but cannot perform as well as HDMI. VGA is even older and analog-only, making it the weakest video cable still in use today. 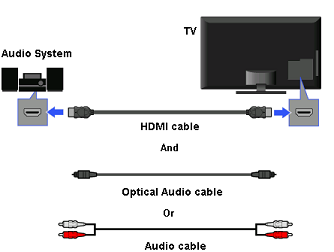 When someone says “HDMI”, they are usually referring to a full-size HDMI cable. This is also called HDMI Type A. Most devices that use HDMI connections are big enough to sport at least one of these ports, but what about smaller electronics? These days, many people want to be able to connect handheld devices like tablets and smartphones to TVs. When using an online streaming service or even doing something as simple as looking through pictures, it can be nice to put those images on a bigger screen. Mini HDMI (also called HDMI Type C) and Micro HDMI (HDMI Type D) ports are used on smaller devices where there is not enough room for a standard HDMI port.

The designers of HDMI also made sure that HDMI would remain compatible with other types of audio/video cables. Other digital video cable formats are all compatible with HDMI, either as a pre-made cable or by using an adapter to change a standard HDMI cable to whichever other format is needed. It is possible to use HDMI with analog signals as well, but this requires a converter. Converters usually need a secondary power cord to plug into an outlet instead of using a single cable like digital-only setups.

LIMITATIONS OF HDMI AND HOW TO GET AROUND THEM

While HDMI is a fantastic all-around cable, it is not without its limitations. The main drawback is distance. A standard HDMI cable has a maximum distance of 60 feet. Some HDMI cables may have issues at shorter lengths as well, depending on the quality of the cable. There are two main ways to resolve this issue. The first is to use an extender. Extenders come in pairs and allow an Ethernet or coax cable to be used as an extension cord for the HDMI. These can allow HDMI to run up to almost 2,300 feet (depending on the model of extender used).


HDMI fiber optic
The other method is to use a fiber optic HDMI cable. Most HDMI cables are made with copper and use electricity to send signals. Fiber cables use light (lasers) instead, which have a much longer distance limit. This technology does make the cables directional (one-way), so take care not to install one backward by mistake. This breed of HDMI can support distances of up to 200 feet and have a built-in Micro HDMI connection for use with handheld electronics.

The other major factor to consider is the speed of an HDMI cable. If the cost of a new television has four digits, a standard 2.0 HDMI cable may not be up to snuff. In that instance, a RedMere HDMI cable is a great solution. This type of HDMI is built with special computer chips that boost functionality and allow the cables to be made with less metal, which provides better flexibility. Like fiber optic HDMI cables, RedMere cables are directional, so it is possible to accidentally install them backward. Always make sure to check the marking on the ends of a RedMere cable before installation.

What is HDMI ARC?
Many home theater setups don’t use the TV’s speakers – and instead, make use of a separate speaker system for improved audio. Only one problem: If your smart TV is generating the content by streaming Netflix or Spotify, for example, or with the built-in tuner, how are you supposed to use that audio setup without a separate cable? HDMI ARC solves that issue.

Now, you can have an HDMI cable between an audio/video receiver and your TV and still use the speakers connected to that receiver, even when playing content directly from the TV.

HDMI ARC also comes in handy if you have an external soundbar. For example, you can connect all your gaming consoles, streaming devices, and so on, to the TV directly, then connect the HDMI ARC port to a sound bar, allowing you to hear high-quality audio through the soundbar when using all your devices.

HDMI ARC isn’t as widely supported as it should be. While many TV manufacturers have HDMI ARC ports on their TVs, sometimes those ports don’t support 5.1 surround – so if you’re having trouble implementing surround sound on your setup through an HDMI ARC port, that might be why.

DisplayPort is currently up to DisplayPort 1.4, which supports up to an 8K resolution at 60Hz, with HDR. DisplayPort is much more commonly used on computer monitors and computers than in TVs and other consumer devices, and there’s a good reason for that – it supports tech like AMD’s FreeSync and Nvidia’s G-Sync, which helps create a tear-free gaming experience. Unfortunately, few manufacturers are using DisplayPort 1.4 – and many are stuck at DisplayPort 1.2. If you only have access to an HDMI 2.0 port or a DisplayPort 1.2 port, as many monitors are limited to, then HDMI may be better thanks to the HDR support. That said, if your monitor has newer versions of DisplayPort and you’re a hardcore gamer, then using it over HDMI may be the way to go.

Can you convert DisplayPort and USB-C to HDMI?
Thankfully, you can convert most digital display signals to HDMI – making it easy to connect to an HDMI display through a DisplayPort on your laptop, for example. There are plenty of adapters to convert to HDMI, and they’re relatively inexpensive too. There’s a simple adapter to convert DisplayPort to HDMI, for example. Converting from USB-C and Thunderbolt 3 is also possible with a range of USB-C to HDMI adapters or cables.  Converting to HDMI from a DVI source (or vice-versa) is easy to accomplish in a simple cable because the signals are electrically identical- it is essentially a physical connector change.

HDMI signals can also be converted. Notably, you can compress an HDMI signal to work over Ethernet, which makes it easier to transmit HDMI over long distances. That’s perfect for conference rooms, classrooms, or home theater setups that need to send a video signal up to 300 feet.

GET YOUR HDMI CABLES TODAY

Heyoptics offers a wide variety of HDMI products. This includes regular HDMI cables, cables that go to other formats, adapters, converters, and more. No matter what type of HDMI cable you are looking for, Heyoptics  has the connections to get you connected.