As the smallest form factor for a 400G transceiver, QSFP-DD offers the industry's highest bandwidth density while leveraging backward compatibility with low-speed QSFP pluggable modules and cables, making it popular with fiber optic manufacturers. As the latest hot optical module in 400G high-speed applications, QSFP-DD is often compared with other modules such as QSFP56, OSFP, CFP8, COBO, etc. So what is the difference between these optical modules? This article will make it clear to you.

what is the QSFP-DD？
QSFP-DD is designed to fully comply with QSFP-DD MSA and IEEE802.3bs standards. The “double density” in the context of this transceiver means the doubling of high-speed electrical interfaces supported by the QSFP-DD transceiver compared to any standard QSFP28 module. Each channel`s data rate can touch 25Gb/s through a modulation technology called NRZ – resulting in the realization of 200G transmission. However, up to 50Gb/s data rates per channel are achievable through PAM4 modulation technology for 400G network transmission. 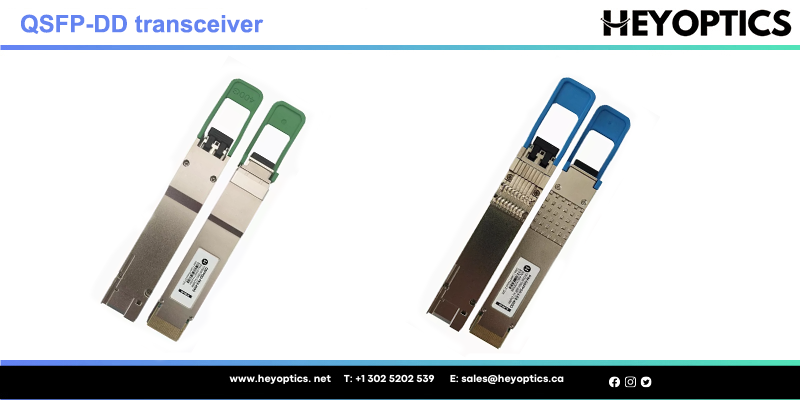 QSFP-DD, QSFP+, QSFP28 and QSFP56 belong to the QSFP form factor, but what are the differences among them? The differences are explained in the following descriptions.

Structure
In terms of the appearance, the width, length and thickness of the QSFP-DD are the same as QSFP+, QSFP28 and QSFP56. But the QSFP-DD module is equipped with an 8-lane electrical interface rather than a 4-lane like other QSFP modules and the ASIC ports of QSFP-DD are doubled to support existing interfaces such as CAUI-4. Therefore, the mechanical interface of QSFP-DD on the host board is slightly deeper than that of the other QSFP system transceivers to accommodate the extra row of contacts.

Bandwidth & Application
The QSFP-DD modules can support 400Gbps while QSFP+/QSFP28/QSFP56 can only reach 40Gbps/100Gbps/200Gbps respectively. Therefore, QSFP-DD connectors are used in 400G optical modules, DACs and AOCs, and applied for the 400G data center interconnections. And QSFP+/QSFP28/QSFP56 modules and DAC/AOC are used for 40G/100G/200G networks. interconnection.

Backward Compatibility
As mentioned above, the QSFP-DD can be backward compatible with the previous QSFP system transceiver modules. In other words, based on the previous form factor, the QSFP-DD has been technically upgraded to support increased bandwidth. And its backward compatibility can avoid existing equipment replacement on the scale and effectively reduce the network upgrade cost. 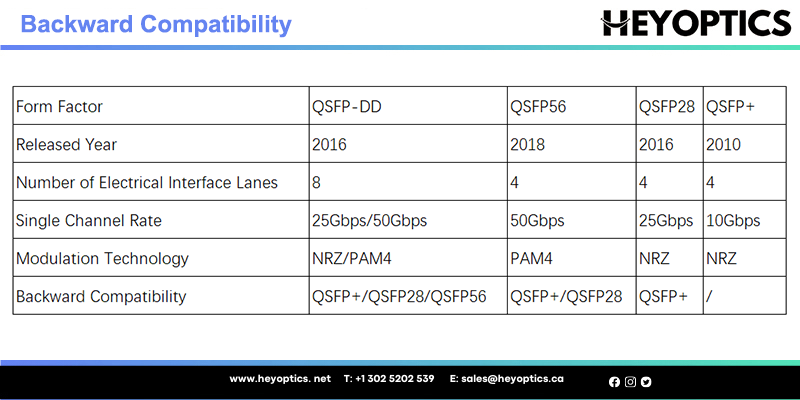 QSFP-DD vs OSFP/CFP8/COBO
QSFP-DD (QSFP56-DD) and OSFP/CFP8/COBO are the form factors of 400G optics on the market, the differences of them are listed below:

QSFP-DD vs CFP8
Featuring a 41.5mm*107.5mm*9.5mm form factor, the CFP8 module delivers four times more bandwidth than existing 100G solutions. Its electrical interface has been generally specified to allow for 16x25 Gb/s and 8x50 Gb/s mode. Since the size of CFP8 is almost three times larger than that of QSFP-DD, the power consumption of CFP8 is much higher than QSFP-DD. Meanwhile, the CFP8 can’t be used on QSFP+/QSFP28 ports. The maximum bandwidth of CFP8 and QSFP-DD is 400Gb/s, but CFP8 only supports in the form of 16x25G or 8x50G while QSFP-DD also supports both 200Gb/s (8x25G).

QSFP-DD vs COBO
COBO stands for Consortium for On-Board Optics, it can be installed internally to the line-card equipment in a controlled environment, which lacks flexibility. And it doesn’t support hot-pluggable, so it is more difficult for COBO modules to maintain than QSFP-DD. Additionally, the COBO form factor has two electrical interfaces——one eight lane and the other sixteen lane to meet both 1x400G and 2x400G transmission requirements. 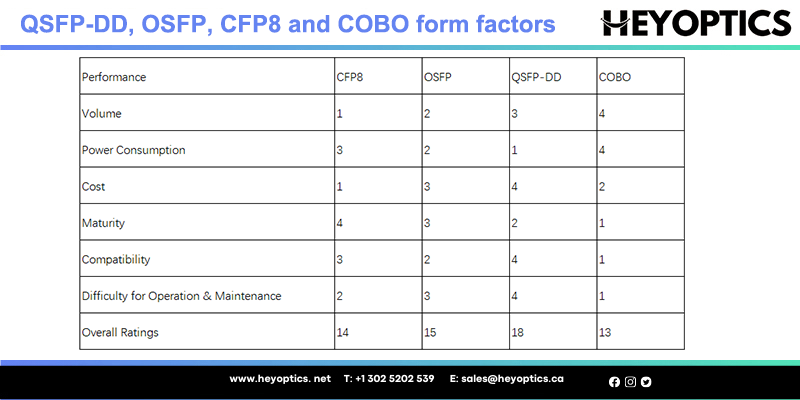 In the light of the above exhibit, it can be concluded that the overall rating of OSFP and QSFP-DD form factors are greater than other form factors. The fiber optic producers prefer the OSFP and QSFP-DD. While the latter is often preferred in telecommunication applications the former is considered more suitable for data center environments.

The Future of QSFP-DD in 800G Ethernet Market
The QSFP-DD (QSFP56-DD) is more suitable for data center applications than OSFP. With the concentration of east-west traffic in the data center and the increasing pressure on the internal bandwidth of the data center, the time gap between the application of high-speed optical modules in the telecom market and the data center market is gradually shortening. The 400G optics will be applied widely. That is, QSFP-DD will benefit from the 400G Ethernet and ushered in a good development prospect. 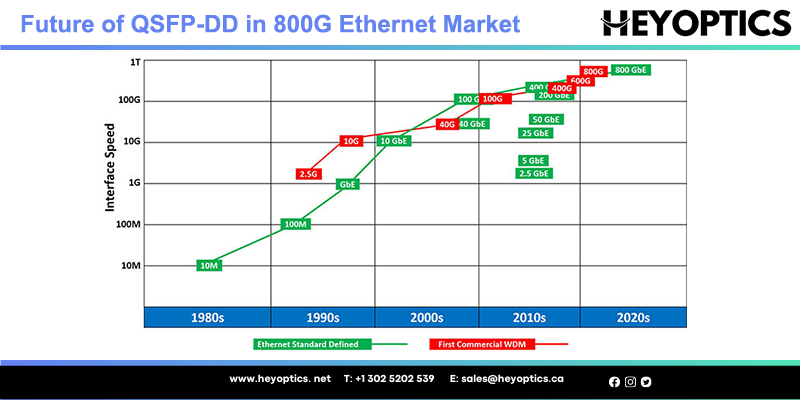 As 400G becomes commercially available on a large scale, single-wave 100G technology is set to mature, laying the groundwork for the arrival of 800G. Recently, the QSFP-DD800 Multi-Source Protocol (MSA) organization released the first version of the QSFP-DD800 transceiver hardware specification, which is dedicated to the continuation of the current QSFP-DD form factor to support a single channel rate of 100Gbps 8-channel new generation QSFP-DD800. This also means that 800G might still adopt the QSFP-DD form factor to bring greater advantages and values for Internet service providers.