Those currently using 1GbE may be thinking about moving to 10GbE. There are a few things you should keep in mind, however.

First, what kind of applications do you need 10 GbE for? If 1 GbE is enough to meet these needs, a transition to 10 GbE is not required.

Next is the cost: 1 GbE is considerably cheaper than 10 GbE, even with all components included. For many applications, 1 GbE technologies also provide a balance between network efficiency, cost-effectiveness, and performance.

On the other hand, the prices of 10 GbE components are constantly falling, and more businesses can now afford them. 10 GbE also delivers faster speeds with less compression and latency. So, for those that have video applications or frequently back up large data volumes, 10 GbE may be the best choice. 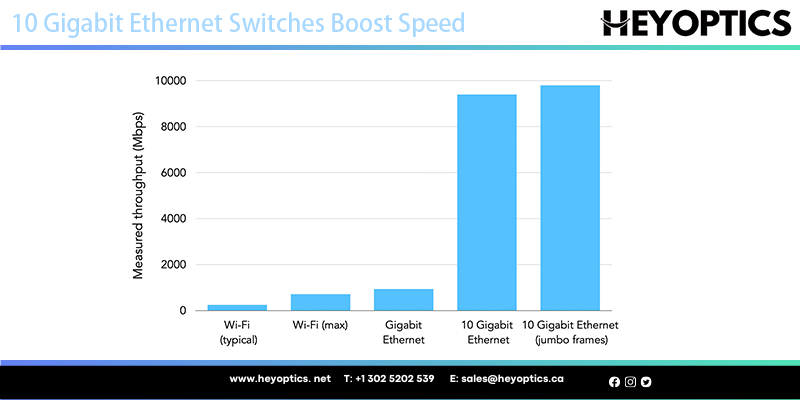 2 - Simple virtualization.
10G equipment can also help reduce your need for on-site servers and storage through virtualized network apps and distributed Storage Area Networks (SANs). These are often impractical on 10/100/1000 speeds, but become easily viable when you've got the sort of bandwidth that 10 Gigabit equipment offers.

Plus, once your network has gone virtual, that makes future expansions into larger or cross-town offices far simpler.  A virtualized network can go wherever you go while ensuring the high-speed connections necessary for modern business.

3 - iSCSI support.
One common misconception among those looking at 10G equipment is that a costly and hard-to-maintain Fiber Connect network is necessary to have an effective SAN connecting your distributed storage.  While FC has its advantages, the iSCSI standard means it's not necessary.  iSCSI can run affordably on your existing Ethernet hardware (although dedicated hardware is better) and works great with 10G networks.

iSCSI can significantly reduce costs on distributed storage, creating another benefit for a 10G upgrade.

4 - Less cabling.
Cables are one of the weak points of a network.  They're everywhere, they're easy to trip over, and the costs of cabling can add up surprisingly quickly.  10G Ethernet can require far less cabling, especially in operations that already have multiple Gigabit Ethernet switches in place to boost the throughputs.


5 - Fewer Bottlenecks
Previous network design strategies tended to put slower Fast Ethernet switches on the network boundaries since they're used to be less traffic at the edge.  With online business so common today, however, the network edge is now becoming a serious bottleneck.

A 10 Gigabit virtualized network can expand the aggregation and switching layers to the edge of your network, removing this bottleneck from the process.  It helps guarantee your workers aren't slowing each other down as they send data around the world.

6 - Greater Scalability
Fast Ethernet and Gigabit Ethernet were somewhat limited in their ability to scale upwards, with slowdowns becoming an issue as more hardware is added.  The 10G standard was developed with scaling in mind.  Through virtualization, up to eight 10 Gigabit switches can be aggregated together as a single virtual switch for a total of 80Gbps in throughput.

That will be plenty for years to come for all but the most data-hungry business.  And presumably, by that time, 40 Gigabit and 100 Gigabit equipment will be cheap. 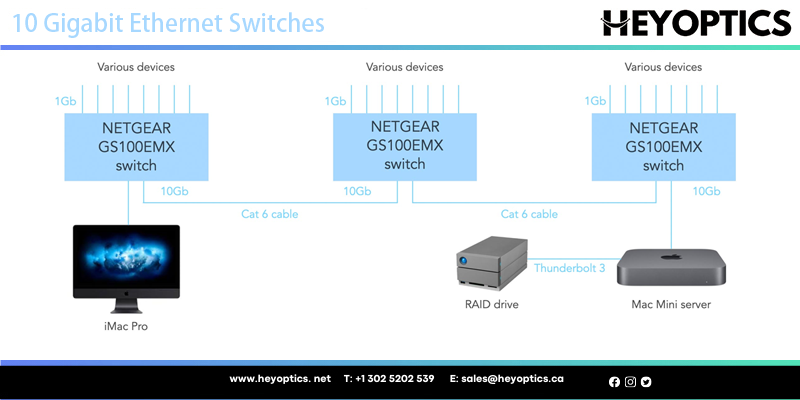 The Future Is Faster Transmissions
The world's thirst for data is growing, and little seems to quench it.  Videos are becoming higher-definition, VR/360-degree applications are growing in usage, and even everyday web pages are once again creeping upwards in size.

If your business is already starting to feel the pinch of data bottlenecks, an upgrade to 10 Gigabit Ethernet switches will put you back in the fast lane.  Contact sales@heyoptics.ca to learn more!